The Federal Aviation Administration (FAA) is looking to overhaul laws pertaining to the use of small unmanned aerial systems (sUAS), classified as aircraft weighing less than 55 pounds, within the next year. The released Notice of Proposed Rulemaking (NPRM) stipulates measures relating to the operation of non-recreational sUAS in terms of height restrictions, aircraft registration, daytime flight restrictions, operator certification, and line of sight restrictions. The NPRM first step in what is likely to be a yearlong process before enforcement of new regulations begins. The White House Office of Information and Regulatory Affairs, within the Office of Management and Budget (OBM), is conducting a ninety day review of the sUAS NPRM (Colborn, 2015). The OMB has indicated both the FAA and sUAS community lack adequate safety data.

The sUAS which crashed in White House grounds in early February was a contributing factor in the recent push for UAS reform. The current legal restriction on US operated sUAS has enabled foreign companies to gain an advantage in the commercial UAS market:

“Sky-Futures, a British company that dominates the use of drones to collect and analyze inspection data for oil and gas companies, says its business soared 700 percent last year as the normally conservative energy industry embraced the new technology. Co-founder and operations director Chris Blackford said the company is coupling drones with software and a better understanding of what works in the field, giving Sky-Futures ‘a head-start over the U.S because we understand pretty intimately the problems facing the oil and gas market, and how we can solve them with technology.’ Looser regulations outside the U.S. have created pockets of innovation attracting ideas, money and momentum, says Patrick Thevoz, co-founder and CEO of Swiss-based Flyability” – Jeremy Wagstaff, 2015

The international commercial UAS market is valued at $100 billion over the next decade, due to increased UAS applications in the forestry, oil and gas, law enforcement, and agricultural industries.  Though military purchases are still dominant, though commercial unmanned aerial vehicle (UAV) spending currently accounts for roughly 12% of the global UAV market and is expected to rise to approximately $82.1 billion between 2015 and 2025 (Ballve, 2014).  The FAA has estimated that, if regulations are changed, 7,500 commercial sUAVs could be flying in the US before the end of the decade.

In the global military UAV market, US firms have been losing their market share in recent years to Israeli, European, and Chinese firms due, to strict export controls.  To help combat this, the Department of State recently announced it will expedite its review process of foreign military sales with respect to 300 km range 500 kg payload class UAVs—otherwise known as Medium-Altitude Long-Endurance (MALE) UAVs. 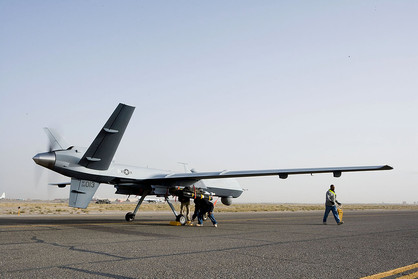 Under the 1987 Missile Technology Control Regime (which affects the sale of UAVs), the United States has historically sold few optionally armed UAVs, even among close allies. For example, MQ-9 “Reaper” sales have been limited to the UK, France, Italy, the Netherlands, and recently Spain. With the rise of the Islamic State of Iraq and the Levant, many Gulf allies are requesting additional American arms exports, such as the “Predator” XP. The Department of State has insisted the expedited review process will still adhere to the Missile Technology Control Regime guidelines. Under the foreign military sales program, any potential American UAV customers must:

Peter Lichtenbaum and Rachel Stohl argue the new aforementioned restrictions will lead to greater difficulties in exporting American MALE UAVs, despite the Department of State pledge to keep its review process to one year or less. If the US Government continues to inhibit the export of optionally armed American UAVs or similar products, states combating terrorism will find alternate suppliers. For example, the US Government recently barred the sale of additional Cobra helicopter gunships to Nigeria amid human rights concerns; Nigeria subsequently acquired Chinese CH-3 UAVs which it has deployed against Boko Haram militants.