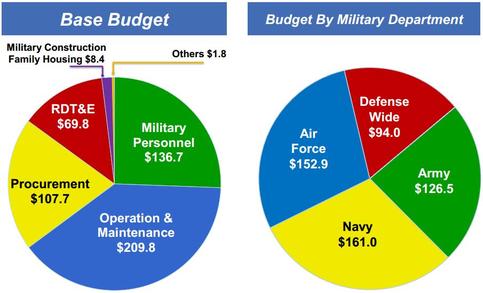 Earlier in February, the Obama Administration released its fiscal year (FY) 2016 budget request for the Department of Defense (DoD) with a base budget of $534 billion and an overseas operations contingency (OCO) budget of $51 billion. The President’s budget submission does not account for sequestration, which imposes a base budget cap of $499 for the DoD and does not affect the OCO budget. A strong consensus exists among defense and budgetary analysts that Congress is unlikely to repeal the Budget Control Act (BCA) in FY 2016. House Armed Services Committee Representative Adam Smith (D-Wash.) remarked, “I fully expect that Congress will again fight proposals to allow the Department of Defense to deal with the damaging effects of sequestration. We have seen this act before.”

The appropriations and authorization committees will hold hearings on the budget from February to March and are likely to make significant changes to the President’s budget, in a similar manner as the DoD’s FY 2015 budget.  Despite the low probability of the base budget exceeding FY 2016 BCA caps, the President’s budget request does provide valuable insight as to the DoD’s current funding priorities, including: prioritization of the Navy and Air Force over the Army, developing technologies and capabilities relevant to great power threats under the third offset strategy, and improving the nation’s cyber security.

Budget allocations by use and department. Image Credit: DoD.

Under the President’s FY 2016 request, the Air Force and Navy would be the largest beneficiaries of increased spending. The Air Force would receive an additional $16 billion, with a total budget of $152.9 billion, and the Navy would receive an increase of $11.8 billion to bring the total budget up to $161 billion. In contrast, the Army’s budget was increased by only $7 billion, to $126.5 billion. The Air Force received a disproportionally large increase in procurement funding, which comprises more than half of all additional procurement funds (CSIS, 2015). A major production ramp up of Lockheed Martin’s F-35 is expected with an order of 57 aircraft in FYC 2016 from 38 in FY 2015. Air Force officials have consistently stated their desire to protect the F-35 program from the effects of sequestration, along with the Long Range Strike Bomber and Boeing KC-46 tanker programs (Wasserbly, 2014). The prioritization of the Air Force and Navy over the Army is consistent with DoD discussions of the Pacific rebalance which is reliant upon air and sea power. The rebalance was listed first among the five strategic priorities of the FY 2016 budget:

Before his departure, former Secretary of Defense Chuck Hagel had launched a number of defense initiatives designed to promote innovation in technologies relevant to conflicts with great power adversaries like China and Russia. The President’s budget request increased the research development testing and evaluation (RDT&E) budget by $6.3 billion to a total of $69.8 billion. FY 2016 briefing slides listed a few technological areas the DoD hopes to develop as a result, including high energy lasers, rail guns, improve navigation and positioning, and high speed strike. Defense Secretary Ashton Carter is expected to be a vocal advocate of increased DoD investments in RDT&D:

“…the most important advocate for the future will have to be the presumptive Secretary of Defense, Ashton Carter. Protecting these [technology] investments, many of which have their roots in Dr. Carter’s tenure as Deputy Secretary and Under Secretary for Acquisition, Technology and Logistics, will likely be a priority for the new Secretary, and he will be the one to commit to maintaining these future investments over other near-term priorities.” – Center for Strategic and International Studies, 2015

Keep an eye out for Part II of this series, will focus on analysis of cyber developments for FY 2016, including budgetary analysis; the Office of the Director of National Intelligence’s new Cyber Threat Intelligence Integration Center; and Executive Order 13691.