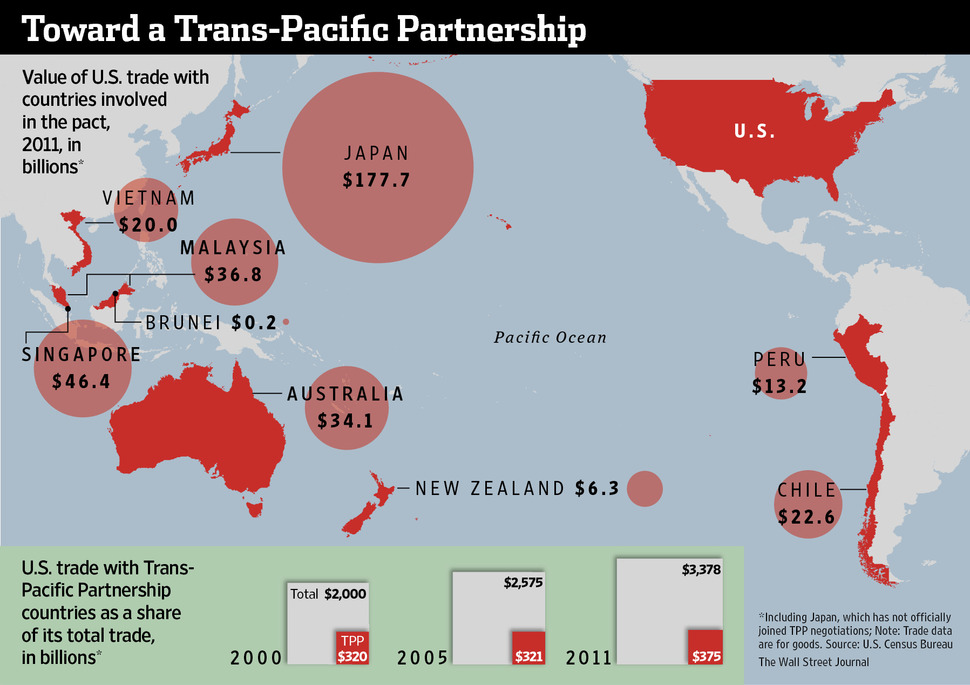 The United States Senate passed a bill over Memorial Day weekend which would grant the President Trade Promotion Authority (TPA) with respect to the Trans-Pacific Partnership (TPP) free trade agreement. The TPA, or “fast track” authority, is critical to securing a final TPP free trade agreement with eleven other countries, as it effectively grants the President authority to negotiate on behalf of the United States. Furthermore, the TPA would limit Congress to a simple up or down vote on the final TPP terms, without the ability to subsequently add amendments pending the conclusion negotiations. The 62-37 vote in favor of the TPA overcame the objections of labor groups and progressives who have railed against the perceived lack of labor protections, secrecy of negotiations, and stringent intellectual property regulations. The House will take up the TPA after returning on June 1st, where it will face numerous hurdles from pro-labor democrats, “poison pill” amendments such as the proposed currency manipulation measure – which the President indicated he would veto, and conservatives, who are hesitant to grant the President negotiating authority on behalf of the United States.

The TPP will eliminate tariffs across 11,000 categories among the twelve nations in the agreement, and will affect $882 billion in US import and $727 billion in US export flows (Ferguson, McMinimy, and Williams, 2015). While estimates on US growth as a result of the TPP vary, a consensus exists that the induced US growth would be a minimal net positive within the range of 0.13-0.19% GDP, or less than a $40 billion net increase in social welfare. The calculations of net benefits accrued as a result of the TPP factor the relative increases in US economic sectors as a result of losses in other areas of the economy, e.g. US agricultural exports are expected to rise as a result of the TPP, in contrast to a decline in manufacturing. Overall, the changes will be minimal, as the United States economy is comparatively open relative to other TPP partners such as Japan and Vietnam, and US firms already compete with low wage manufacturing centric economies:

“For those who worry that, after the TPP, the United States would have to compete against low-wage countries — it’s too late. As Zachary Karabell notes, we are already living in a free-trade world. The average tariff in the developed world is about 3 percent. And in the past three decades, developing countries have cut their tariffs substantially as well. The World Trade Organization notes that China’s average is less than 10 percent today, down from about 40 percent in 1985.” – Fareed Zakaria, 2015

The primary US motivation for passing the TPP given the minimal gains to domestic economic growth is geopolitics. The TPP is cornerstone of the Obama Administration’s economic aspect of the Asian rebalance, which seeks to assert and preserve US influence in the Pacific as a hedge to China’s increasing military and economic influence. The greatest beneficiaries of the TPP are countries whom both the United States and China are vying for influence rather than traditional stalwart US allies such as Japan and Australia. Vietnam and Malaysia are expected to benefit disproportionately from the TPP with 28% and 6% additional GDP growth, respectively, by 2025 (Petri, Plummer and Zhai, 2013). Proponents of the TPP, such as former Undersecretary of Defense for Policy Michèle Flournoy, argue the TPP is a means to demonstrate long-term US commitment to Asia and prevent China from creating trade policies in the region contrary to US interests. Secretary of Defense Aston Carter made similar remarks and stressed, “Passing TPP is as important to me as another aircraft carrier”.

The Obama Administration has been hard-pressed to continue with the economic and diplomatic aspects of the re-balance given the series of crises in the Middle East and Ukraine, but the Military aspect of the re-balance is well underway. The Navy will base 60% of all its ships in the Pacific by 2020 including additional forward deployed ships and both the Navy and the Air Force will prioritize their most modern equipment to PACOM including all DDG-1000 destroyers and the first F-35s to be deployed overseas.